It’s amazing what we are capable of doing when there is no one to do it for us.

This came to me as I was standing on a chair in my shorts and high-heeled boots in my shop with drill in hand, driving it into a brick wall to mount our beautiful canvas manifesto. Now, I know that for many, it is no great feat. For me, however, the drill is a foreign object for which I have no great desire in mastering. Previous attempts at doing so has resulted in collateral damage.

Since we picked up the canvas from the printers, I discovered I simply cannot hammer a hook in because we are dealing with a brick wall. The whole thing was a major source of irritation. I was irritated at my fiancé because he wouldn’t take 40 minutes out his day to drive down to the shop and drill a hole. I was irritated at our subtenants who could not do it for us, even though I didn’t actually ask them for help. I was irritated at our employee Rachael, because I knew there was nothing she could really do to help me. In fact, I was just annoyed that it was up to me. And the canvas would sit there and gather dust until I did something about it.

So that morning, I got my man’s drill from under the bed and took it with me to the shop. I examined the drill bits and picked the right one. I stood up on a chair, drilled a hole and mounted my canvas. It took less than 2 minutes, and now its done!

In a flash I had easily resolved something that I thought I couldn’t, wouldn’t, shouldn’t do. What a waste of thinking time!

The point is, if you want something done, just do it.

Want to drill a hole? Do it!

Want to start a business? Do it!

Want to change the world? Yep, just do it!

Note to self: When you accept that a task is up to you and take action to do it, it gets done!

I know a picture on a wall seems irrelevant in the whole scheme of life changing feats, but for me it served as a metaphor to the realisation that we capable we are of everything we put our mind to. Drilling holes at the very least. 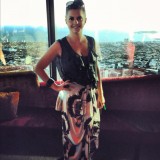 Inspiration From A Stop Over

5 Things That Help Me Kick Goals

Up Close And Royal

How To Choose Product Images That Drive Online Sales