When I think of a blacksmith I have to admit I picture a scene straight from medieval times with a large, hulking man hammering out horse shoes. Of course, blacksmithing has moved on, along with the world around it, and I was fascinated to meet a local female blacksmith. Tall and slender with a short pixie cut, Denise Axelsen doesn’t immediately strike you as someone who works in a manual trade. The more you talk to her though, the more you realise her creativity, practicality and passion for her trade.

After meeting Denise at a local art gallery, I quickly realised she was an inspiring example of a woman who has pursued an unusual career choice, despite the perception of it being an all-male trade.

When did you become a blacksmith?

I first tried blacksmithing when I was at university back in 1995 and after I graduated decided to become a blacksmith. That took another five years to convince the Rural Development Commission to let me in on the New Entrants Training Scheme in pure forge work. I eventually qualified in 2003.

I was introduced to blacksmithing techniques during university and fell in love immediately and knew this is what I wanted to do.

How have you found working in such a male-dominated area?

The first blacksmith I approached was horrified at my request for a work placement. He said “you’re female, you’re old. Why?”.

Since then, everyone I have met has been very encouraging most of the time. Mainly, they are fascinated, actually appear interested and impressed. Apparently, I have quite a good hammer technique. Once they start calling me ‘mate’ I feel accepted.

What advice would you give to women who want to pursue a male-dominated career?

Go for it! If you never try, you will never know. I have to say if someone tells me I cannot do something, it usually makes me even more determined!

Since moving to North Queensland, you have become involved in the arts. How have you found the transition from the practical to the aesthetic?

I like to think having done a degree in three dimensional design before becoming a blacksmith that I have always incorporated aesthetics into my designs, whether it is functional or sculptural. Having said that, I am thoroughly enjoying being around so many artists and discovering their minds work very different from mine. For instance, I find solutions to design problems, and tend to think in 3D. I consider how I can make something work, and the different techniques I could use for a project I am working on. Artists seem to have a theme and a concept and progress their development from there.

Where do you see blacksmithing take you in the future?

I would like a much larger workshop and invest in some blacksmithing tools, such as a power hammer. I would love to own some forges so I can teach others. I am really enjoying collaborative work with other artists and would love to continue doing this.

Denise works in both the functional and aesthetic now, with her pieces ranging from cutting boards to stunning sculptures. To see more of her work, you can visit Artcetera’s Studio 2 in Townsville or go to www.studio2townsville.org. 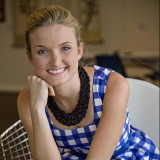