In the late 1990s, debate about climate change was starting to make ripples in the Australian media. Lizzie Brown was concerned about environmental issues and saw engineering as a path to solve some of our global problems. Being a natural problem solver and having a desire for a meaningful career, she embarked on an engineering degree.

Along her journey through uni it became clear engineering could help provide access to services like clean water, sanitation, and renewable energy to around half the world’s population living in poverty. More access to these basic services would make an enormous impact both environmentally and socially in the developing world.

From about her third year of uni Lizzie started to look for engineering jobs involving community development and poverty alleviation. She really struggled! All the engineering work seemed to be large-scale bridges or gas pipelines supporting industry – part of the problem – rather than addressing community needs.

Lizzie was interested in water management so following uni she worked for some water consultancies while looking for a role to connect her with community development. Then as though the stars magically aligned, Engineers Without Borders (EWB) started operations in Queensland and Lizzie said “Wow! Finally, here is the organisation I have been looking for – for the last five or six years.”

Like everyone during EWB’s infancy, Lizzie volunteered and helped the organisation grow building on two major focus areas; capacity building through technical projects with communities, and a focus on the way Australia thought about its responsibility for community development.

She moved into the education strategy role and then became Operations Director in 2009. By 2010, EWB’s founding CEO Danny Almagor stepped down and handed the top job to Lizzie’s capable hands.

I asked about her rise to CEO level and what makes the leader of such a complex, people-based organisation tick.

“I was working as a technical engineer doing modelling of flooding and rivers (Water Sensitive Urban Design) for urban developments. I moved from number crunching to a people-based business and building a community of like-minded people. The skills in my new role were completely different to what I had been used to.” 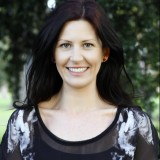 Why Charity And Giving Is Addictive