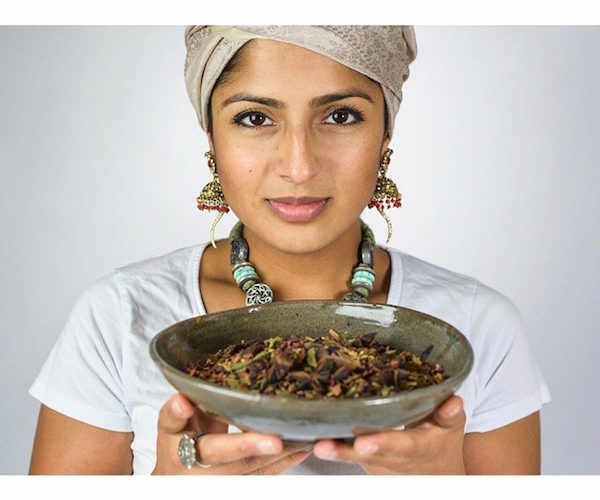 When Chai Walli founder Uppma Virdi kept selling out her small batches of special blends, she hesitated making the move. She was socially conditioned in her culture that running a business was not for a woman –  an educated woman only has a professional job.

If you had met Uppma Virdi at a backpacker’s hostel in Europe many years ago, it would have probably been over a pot of chai. The aromatic tendrils of her spice blends would have gently pulled you into the kitchen where you would have accepted a steaming cup and settled down at the table to strike up a lasting friendship.

The granddaughter of a natural medicine healer in Punjab, Uppma inherited her grandfather’s love for the milk and spice beverage and more importantly, his gift of creating extraordinary spice blends.

Then old age caught up with her grandfather and he retired from chai blending. That’s when Uppma stepped in. Her passion quickly earned her the moniker chai walli or tea lady, and she began using her brews as a bridge to the rest of the world.

“I didn’t realise how much chai was part of me until I was travelling alone in Europe,” Uppma said. “I would travel with spices in my backpack or I would seek out an Indian shop to get my supply of spices.”

“Once I arrived at a hostel, I’d size up the situation and then go to the kitchen to make a big pot of chai. I made so many good friends that way. That was when I realised how much chai connected people, and that my language is chai.”

It would take many more years before she realised that chai also spoke the language of business. Uppma, who now lives in Melbourne, officially launched Chai Walli in August 2014 and has been steadily gracing events and cafes across Australia and Asia.

Apart from your grandfather’s influence, how else did chai play a role in your early years?

Chai is the national drink of India. It represents a culture of giving and sharing with the community. Every single family in India has a spice box, cupboard or room. I would wake up each morning to the sound of mum turning on the stove to make a pot of chai so I’d get out of bed and have a cup with her.

My grandfather would also talk to me about the importance of spices in our diet. We get nutrients from food and strength from exercise but we also need something medicinal for our digestive system. Indians put spices in their food every day so their immune system is strong and able to fight infections. With Chai Walli, I’m trying to get people to integrate spices into their diets.

You create your chai blends around the concept of Ayurveda. Could you tell us more about that?

Ayurveda is a 5,000-year-old medical system of natural healing. Its philosophy is that the five elements of space, air, fire, water and earth manifest in everything in varying proportions.

I integrate chai and Ayurveda by balancing spices according to their energy properties and strengths. Each spice has its own unique purpose and remedial benefit for the mind, body and soul.

For instance, root spices like ginger and dandelion root are grounding while flowering spices like fennel and cardamom are more uplifting. I currently have a standard 11-spice blend that changes with the season. So in winter, I increase the warming spices like cloves and cinnamon.

When did you have the inkling that you may have a business on your hands?

When I returned from studying law in Europe, my friends back there kept asking me for chai. I began sending them some of my blends, and thought it would be quirky to write Chai Walli on the bags. This carried on for about six months.

Then I started making my own blends in my kitchen and each batch would be sold out. At that stage I wondered if there was something there but I hesitated because in my culture, an educated woman only has a professional job. I was socially conditioned to not think about running my own business.

But there was a calling within me as the chai kept brewing. I just couldn’t shake the chai walli out of me so I decided to dive head first into the world of spices!

Chai Walli only arrived in the digital space last year. What was the turning point?

I was invited to the Sydney Tea Festival as an exhibitor in August last year. When the festival started, there was a line of 20 people at my booth. I had one friend helping me out but we reached a point where the line grew so long that we had to call in four other friends! We sold 1,000 cups of chai in five hours.

That was when I thought that I should probably create a social media account and do something there. Then one of my friends created a logo for me and it just gathered traction. I now have 50 wholesale stockists in Australia and an online retail shop for people to buy their Chai Walli.

Did you have a social media strategy when you started out?

Nope! When I opened an Instagram account in August 2014, I had no idea what Instagram or even hashtags were. I had been anti-social media for most of my life and now here I am creating hashtags like #chaidrated, #chaikisses #livingthechailife!

I use Instagram for two purposes – to educate people about chai and to take orders. Everyday I share something new about chai and every week I share a snippet of the Chai Walli story, which is essentially sharing a part of myself. And it has connected me with so many other people.

How do you select your stockists?

I get a lot of enquiries from different types of stockists like cafes, artisan shops, fine food shops and yoga centres. For me it’s really important for a new stockist to spend time understanding Chai Walli’s origins, where it comes from and how it’s meant to be made. I’m trying hard to share the art of chai. For the integrity and authenticity of Chai Walli, my stockists need to know this art to help share this art.

One of my customers recently told me on Instagram that she and her best friend always drank my chai together. Then her best friend moved to Ireland. This girl sent her a packet of my chai and they drink it together at the same time every week. That’s how they connect. And this is why I do what I do – to connect people.

The Cost Of Being A Woman

Adelle Cousins: Where the Styled Things Are

11 Ways To Stop Your Business From Taking Over Your Life